Book Review: In the Shadow of the Storm by Anna Belfrage 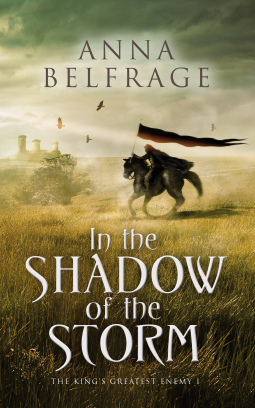 In the Shadow of the Storm is the first in the series of The King’s Greatest Enemy.

Lord Roger Mortimer saved the life of Adam de Guirande as a child, now an adult and knighted Sir Adam will so anything in his allegiance to his lord including marry. But is the lady he marries really who they both think she is?

The Guirandes are fictional but Roger Mortimer, 3rd Baron Mortimer, 1st Earl of March was very real and most certainly rose in rebellion against the king, the first instalment follows Mortimer, Adam and his new wife Kit. When the rebellion begins Adam has no choice but to ride with Mortimer whether Kit supports this or not.

Before they can ride off to war Adam discovers his new wife Katherine de Monmouth is actually Kit de Courcy both daughter of De Monmouth but different mother’s and until now Kit had not been known about to any but her parents. Katherine was having an affair with Mortimer which Adam is jealous over until he realises he didn’t marry Katherine he married Kit. But was this betrayal any better?

The war makes Kit realise she has fallen for Adam and will do anything to save his life but will it be enough? Hugh Despenser, enemy of Mortimer is determined they should all die, so who lives and who dies?

Fantastic historical fiction with romance thrown in. I love the characters. Belfrage has created characters you just cant help but love or hate. The depiction of Despenser is incredible! I couldn’t put this down until I’d finished. I’m already lining up the next in the series!